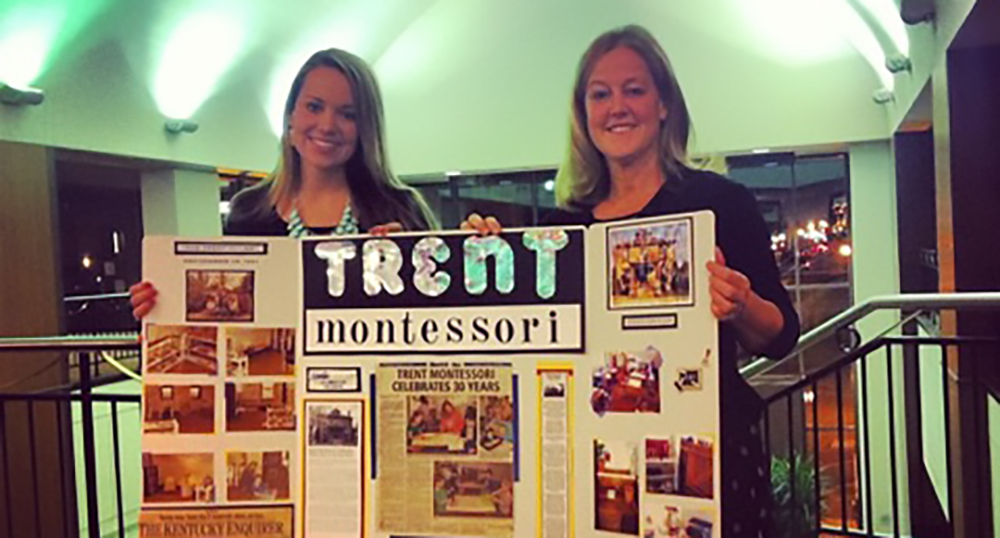 In case you missed it, we were featured in an article by Ft. Thomas Matters about our 35 year anniversary!

Fort Thomas resident Jan Haas decided that she wanted to work with children outside of the traditional teaching method while attending Hanover College. So, after receiving a B.A. in sociology and early childhood education, Haas took Montessori training with the dream of eventually starting her own school.

“During my written and oral exams, Renilda Montessori, Maria Montessori’s granddaughter, encouraged me to start my own Montessori school,” Haas says. “I worked one year for a Parent Coop in Fairfield, Ohio, and then decided to open Trent the following year.”

Since opening 35 years ago, Trent Montessori in Newport has served more than 400 children from Fort Thomas.

Thirty-five years ago Haas and her husband, Eric Haas (the mayor of Fort Thomas), lived in an 1889 Victorian called “The Trent House”—a Kentucky landmark—in Newport’s Mansion Hill neighborhood. “We started the school in this historic home,” Haas says. They applied through the Kentucky Department of Education as a private school and opened Trent Montessori’s doors on September 15, 1981. In 1982 they moved the school to its current location, a historic home at 305 Park Ave., Newport.

“When I started Trent I was pregnant with our first child, Lan,” Haas says. “I was so excited to start Trent so that I would be able to have my own children with me during the work day.” This job perk continues for Trent’s teachers today. “They are able to bring their own babies/toddlers to Trent during their work day, which allows them to be with their child during the wonderful, changing, early years of life. This is definitely a win/win for all.”

Two years later Ryan joined the Haas family; four years later, Erin. And each of Haas’ children stayed with her as she taught, sometimes sitting in the classroom while Trent children read them a story.

“We started with two families (four children) one Caucasian and one African-American,” Haas says. “I felt that this was the perfect beginning for what would become a diverse Montessori school.” Haas says she also wanted to offer an authentic Montessori school for all economic backgrounds. “Maria started her first Casa de Bambini in San Lorenzo, Italy, for children, some with learning difficulties, and living in the slums,” she says. “Eric and I were fortunate to visit her school and seeing the school and surroundings confirmed my thoughts that Montessori should be available for all children.”

As such, Haas says she has tried to keep Trent Montessori’s tuition as low as she can so that all children may have the experience of a Montessori education if they wish. “We have grown from four to 60,” she says. “We added our Extended Care after four years and today many of our families are enrolled in our Montessori/Extended Care classes.”
 Several of Trent’s graduates have returned to the school as part of the teaching team, and now graduates’ children attend. “Having my daughter working at Trent, and having my own grandchildren attend Trent is a dream come true,” Haas says.

Haas’ daughter, Erin Eckstein, received her B.A. in elementary education from Hanover College and then took an additional two years of training in Montessori. “I was so happy when Erin joined the Trent teaching team in 2012 and is now the Assistant Administrator and one of the lead Montessori Directresses,” Haas says.

“[They] are dedicated and caring individuals who are helping prepare our students for their future,” Haas says. “We will continue to be focused on preparing our students to be lifelong learners. While the Montessori method has been around for over 100 years, there has been more recent admiration for this teaching style. Our hopes for the future are that more parents become familiar with Montessori and decide to place their children in an environment to help them grow as independent, lifelong learners.”

The mission of Trent Montessori is “to provide an authentic Primary Montessori education in a loving and nurturing environment. As a young child once said to Maria Montessori, ‘Help me to help myself’ we are dedicated to helping each child reach his or her fullest potential by meeting their developmental and social needs which will guide them to become successful members of their community.”

(To see how Montessori relates to Google and Amazon, go here.)

For more information about Trent Montessori and to find out about enrollment, visit their website here. “Most children are placed on our waiting list when they are infants,” Haas says. “The earliest you may put your child on the list is when the parent knows the sex of the baby.”

Haas also notes that it’s important to observe a Montessori school prior to making your final decision. “Unfortunately Maria Montessori did not copyright the term, Montessori,” she says.

According to Haas, things to look for in a true Montessori school include a directress with a recognized AMI or AMS certification, limited adults in the classroom in order that the children will become independent, a mixed-age classroom of 3- to 6-year-olds, and a complete set of didactic Montessori materials “in a beautifully prepared environment for children to develop a love of learning.”

“Children are human beings to whom respect is due, superior to us by reason of their innocence and of the greater possibilities of their future.” —Maria Montessori, 1870-1952

You can find the original story here: http://www.fortthomasmatters.com/2017/03/trent-montessori-celebrates-35th.html